Every image on this website can be super-enlarged by left mouse clicking once or twice depending on the desired size.

This site is dedicated to the preservation of the Word of God through Hebrew Scrolls. It is written in Psalms 119:89 “For ever, O Lord, Thy Word is settled in Heaven.”

The complete set of Hebrew Scrolls that make up the Hebrew Scriptures called the TaNaKh.

Today Rabbi Michael and I were examining a beautiful old Scroll of Esther. The Scroll could date back before the 1800s, but I am safe to say it is an old treasure. Several things such as the iron gall ink degradation and the lack of the uniformity in more recent Scrolls help date older Scrolls. It is my estimation (I am not a Sofer but I have purchased almost 100 Scrolls from many countries and have some knowledge.) that the Scroll was written in a poorer village in the Ukraine, Russia or Romania. Another very interesting thing about this Scroll of Esther is that God’s Name, the Tetragrammaton, YHVH in written twice in the sentence structure by enlarging the four letters. This is only the second Scroll of Esther I have seen like this.

These are the two verses where Ha-Shem is indicated.

Esther 7: 5 Then the king Ahasuerus answered and said unto Esther the queen, Who is he, and where is he, that durst presume in his heart to do so?

Esther 7:7 And the king arising from the banquet of wine in his wrath went into the palace garden: and Haman stood up to make request for his life to Esther the queen; for he saw that there was evil determined against him by the king.

The Scroll of Esther is the only Biblical Hebrew Scroll that does not contain the name of God, but some Soferim have superimposed Ha-Shem into the narrative. 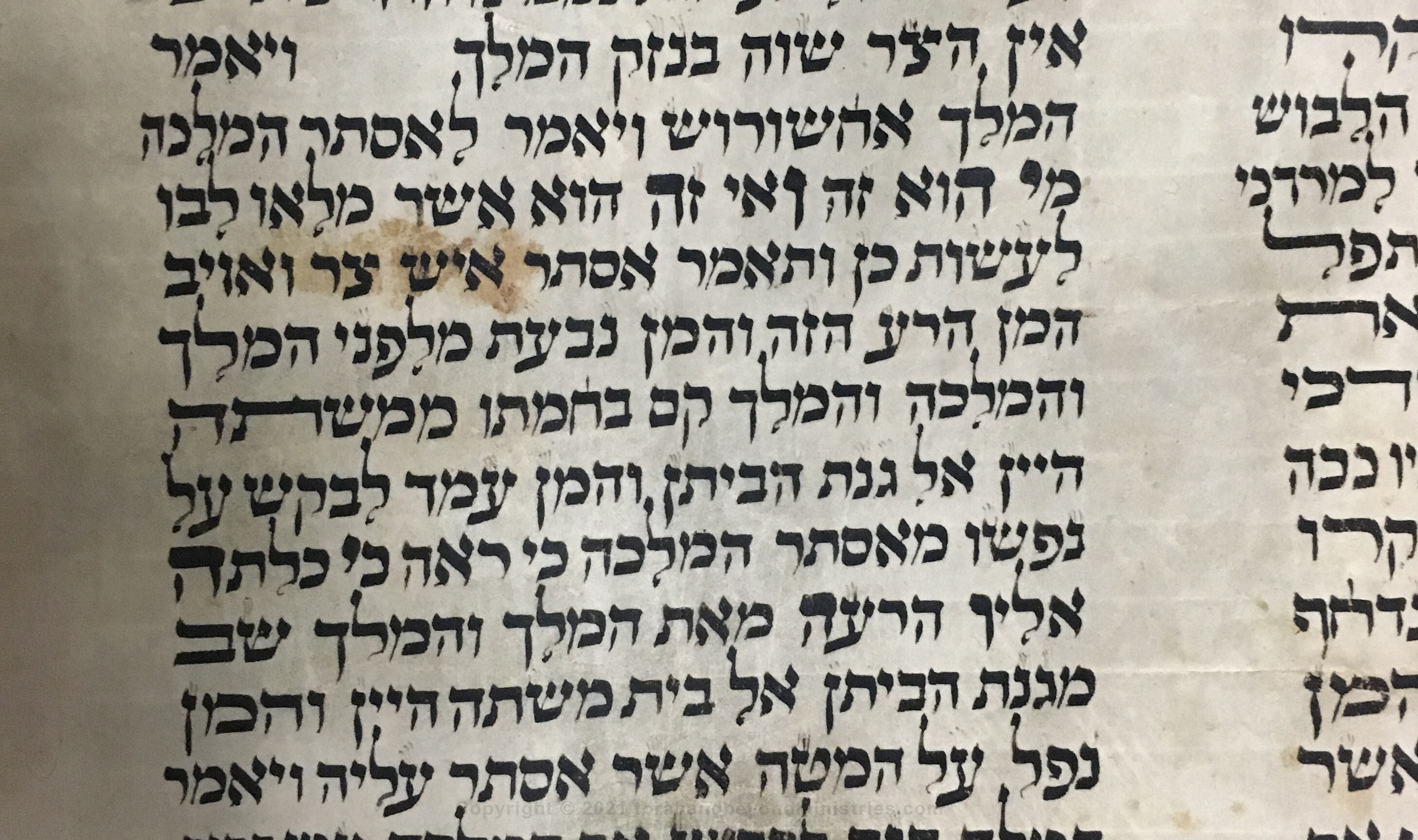 We have finished photographing every column of the Hebrew Scrolls that make up the entire TaNaKh (commonly called Old Testament), 16 Scrolls, and they are posted to this web site.

As we put these Scroll images on this web site it is safe to say these will be the only source of actual Hebrew writing of Scrolls like Psalms, Isaiah, Jeremiah, Ezekiel. (Except for the Dead Sea Scroll images) It is very tedious work aligning the Scroll columns to be as near perfect as possible. The camera used is a Cannon EOS 80D which takes each picture at over 34,000,000 Megapixels. Of course, we will not be able to put such large photographs on the web site, but the ones we will install will be excellent quality for you see every detail of Scrolls used from the 1500s to the 21st century. 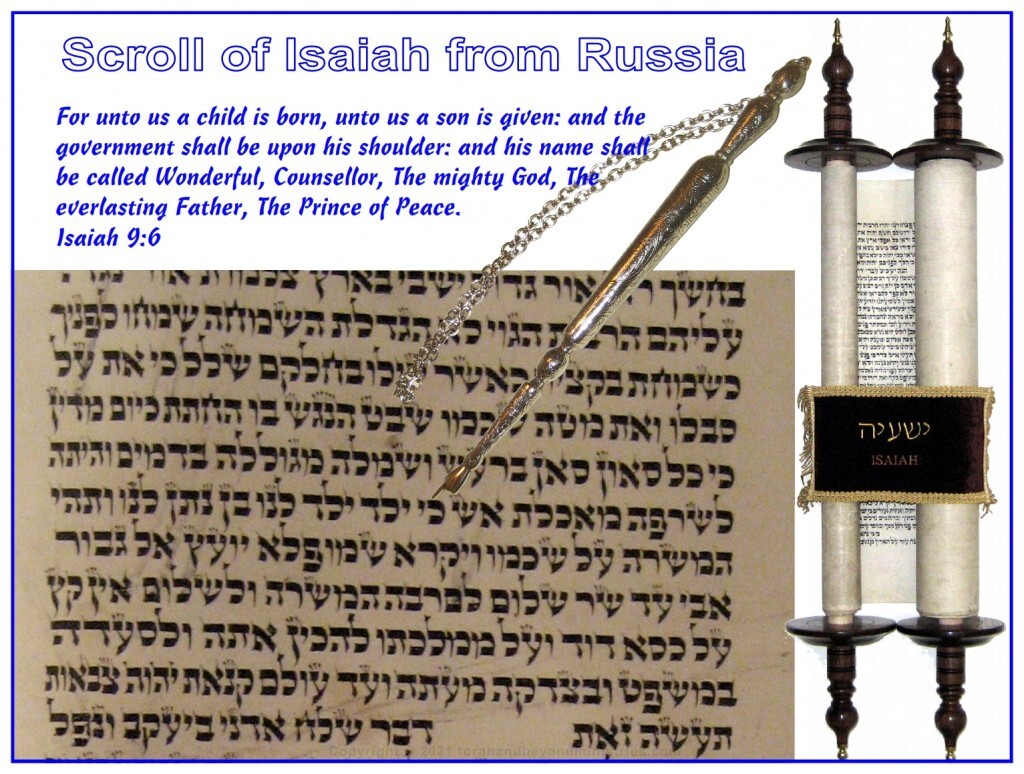 Hebrew Scroll of Isaiah written in Russia early in the 20th century. Pointing out Isaiah 9:6

Our site is designed to educate Jews, Gentiles, and Christians about the Word of God in the original Hebrew Scroll format. Please visit often as we are adding and upgrading our content as we migrate from our old site scrolls4all.com.

Gary & Artis Zimmerman of the site gracetranscendingthetorah.com have purchased over 70 authentic Hebrew Scrolls of which most date to the 19th century and beyond. The Scrolls were written in Lithuania, Israel, Poland, Hungary, Romania, Iraq, Morocco, Italy, Holland, Germany, Yemen, Spain, and many countries which were in the former Soviet Union. Many of these Scrolls had gone through the Holocaust and were severely damaged. We have moved most of these Scrolls to collections in South Carolina and Texas.

It is our purpose to use photographs from these Scrolls throughout this site to enhance the Bible lessons. 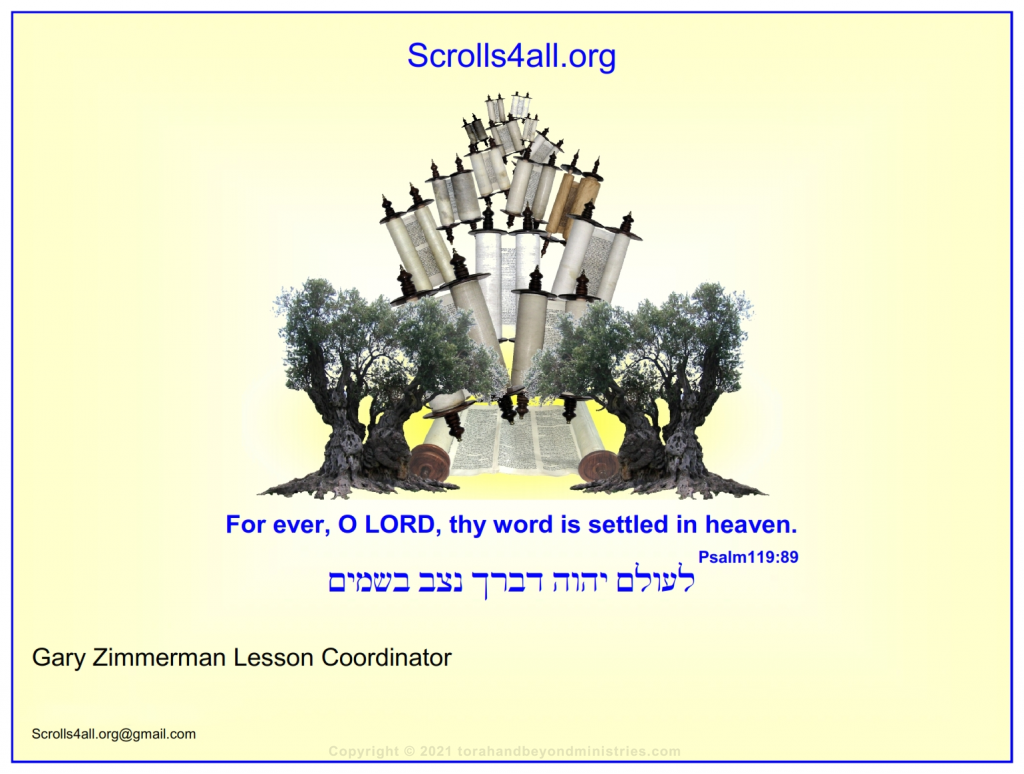